As we have covered in previous posts, helium is a crucial supply chain input for some of America’s most advanced industries. In addition to normal supply and demand constraints, another factor that companies who depend on a steady supply of helium need to consider is where their helium comes from. Here, we will discuss why helium is subject to an abnormally high amount of geopolitical risk and how Total Helium is doing its part to mitigate that risk for the United States.

Today, most of the global supply of helium comes from a small handful of countries:

With supply concentrated in the hands of so few countries, it is clearly a matter of national security that the US controls its own access to helium. Several things can disrupt the United States’ access to helium supply when sourcing from overseas. In fact, several of these events have already transpired, placing US helium supply at risk and driving up prices.

Prior to 2022, it was assumed that one of the world’s largest sources of helium in the 2020s would be Russia. Expected to have two facilities online by the end of 2022, Russia had been widely anticipated to start supplying large amounts of helium to offset the decommissioning of the Federal Helium Reserve in the United States. However, Russia decided to invade Ukraine in early 2022, which set off a round of economic sanctions among Western nations. With Russian exports essentially off limits as a result of those sanctions, relying on helium supplied by Russia has been proven to be a risky proposition.

Similarly, Qatar is another of the world’s major helium producing countries. However, in 2017, “multiple Arab states closed their borders to Qatar, disrupting helium production and transportation for several weeks, affecting 30% of global supply, until alternative supply routes were established.”1

In addition to sanctions, accidents and unplanned facility closures can also impact supply. Obviously, operators of helium production and processing facilities strive to avoid accidents. However, when they do occur, they can have a disproportionately large impact on the world’s helium supply because there are so few helium facilities online. For example, multiple fires have occurred at Russia’s helium processing plants in the past year, taking their supply offline. In 2021, the blockage of the Suez Canal due to a shipping accident caused major disruption to the flow of helium coming from Qatar. Even domestically in the US, one of the primary helium processing facilities was unexpectedly shut down for maintenance in early 2022, further disrupting the helium supply chain.

Clearly, helium is critical to some of the most important industries in the world. Having a helium supply chain that is constantly put at risk is simply not sustainable. This is why Total Helium is focused on the exploration, production and storage of helium here in the United States. Through its work in America’s heartland, Total Helium can provide a stable supply of helium to the high tech industries whose futures depend on it. 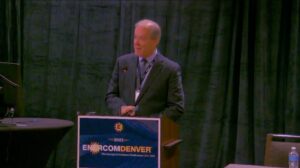