What Is Helium Used For?

The high tech economy of the United States is powered in large part by advances in the medical device, semiconductor, and aerospace industries. Believe it or not, one thing that all three of those important industries have in common is their reliance on helium as a critical supply chain input. Of course, the United States is only one country in the much larger global economy. However, since the bulk of Total Helium’s operations are located in the United States, this piece will focus on the US only.

Let’s start with the forecasted growth of these three critical high tech industries over the next several years:

Obviously, helium is not going to be attached to every single dollar spent in those industries over the next decade. However, it will play a sizable role in each of them, which is something that investors have taken note of. For example, in the medical device space, helium is crucial to MRI machines because of its unique properties as a coolant. Sales of MRI machines is forecasted to hit $8.5 billion by 20284, and those machines will use helium extensively. Similarly, helium will be used in the aerospace industry for fuel tank pressurization and in semiconductor manufacturing to control and prevent various chemical reactions during computer chip production. When considering how large and vital these three industries are, playing any type of sizable role in them translates into huge dollar amounts.

Looking beyond financial forecasts, it’s worth noting how strategically important medical devices, semiconductors, and aerospace are from a US government and economic perspective. Each of those industries has an incredible amount of momentum behind it thanks to specific initiatives and/or national security interests. For example, a renewed focus on the semiconductor industry due to the ongoing shortage of computer chips caused by the pandemic, has led Congress to begin work on the CHIPS act to provide over $52 billion of funding for domestic production of semiconductors. As a result, private industry is already springing into action, as evidenced by Intel’s plans to invest $20 billion in one the world’s largest semiconductor production facilities in Ohio. Similarly, private companies in the space industry are ramping up competition and capabilities as part of the US government’s long term goal of transitioning space from being the sole domain of government agencies like NASA to being the realm of a robust private space sector in the US economy.5 In the healthcare industry, the pandemic has made it clear that in times of crisis, it is essential to national security that the US be able to supply itself with critical medical equipment. With the full force of the US government propelling these industries, it’s clear to see why the growth forecasts are so astronomical.

As with any natural resource, increased demand will need to be met by an increase in supply. With the medical device, semiconductor, and aerospace industries all ramping up demand at the exact same time that the US Federal Helium Reserve is winding down operations, it will be up to private companies like Total Helium to fill the void.

Total Helium could be viewed simply as a traditional natural resources company focused on exploration, production and storage solutions. However, when the high tech applications of helium are taken into account, it’s logical to view Total Helium as a conduit to some of the most strategically important and profitable high tech industries in the world. Playing a valuable role in these crucial industries, and passing that value along to our shareholders, is why we do what we do every day. 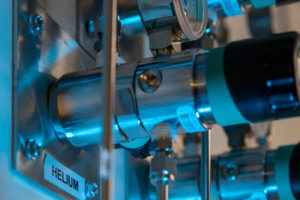